This is the gateway for information about the Operations Simulator including documentation on how the simulator works, how to install and run the software, downloading simulated survey data and viewing the analysis.

Why it is Important to have an Operations Simulator

The Simulator is capable of balancing cadence goals from multiple science programs, and attempts to minimize time spent slewing as it carries out these goals. Ten years of LSST operations can be simulated using realistic seeing distributions, historical weather data, scheduled engineering downtime and current telescope and camera parameters.

The Simulator has a sophisticated model of the telescope and dome to properly constrain potential observing cadences.  This model has also proven useful for investigating various engineering issues ranging from sizing of slew motors, to design of cryogen lines to the camera.

The LSST Project developed the Operations Simulator to verify that the LSST Science Requirements could be met with the telescope design. It was used to demonstrated the capability of the LSST to deliver a 27,000 square degree survey probing the time domain and with 20,000 square degrees for the Wide-Fast-Deep survey, while effectively surveying for NEOs over the same area.  Currently, the Operations Simulation Team is investigating how to optimally observe the sky to obtain a single 10-year dataset that can be used to accomplish multiple science goals.

How the Science Objectives Drive How the Survey is Done

In a ten-year survey, the LSST will take more than five million exposures, collecting over 32 petabytes of raw image data to produce a deep, time-dependent, multi-color movie of 30,000 square degrees of sky. The sequence, or cadence, with which these exposures are made is essential to achieving multiple scientific goals from a single survey, an important feature of the LSST concept.

LSST will take data as pairs of back-to-back, 15-second exposures to aid in cosmic-ray rejection. This pair is called a "visi"t - a single observation of one ten-square-degree field through a given filter. Designing the LSST survey requires ordering these visits in time and allocating them among its six filters so as to maximize the return on scientific goals in a fixed survey duration. Synthesizing the requirements to accomplish the four primary science objectives of the LSST,

results in the following constraints:

Finally, making uniform progress in time toward each of the scientific goals facilitates analyses made while the survey is still in progress.

From its site on Cerro Pachon in northern Chile, the LSST can view sky regions with Declination (Dec.) of less than 33.5 degrees at an airmass of 2.2 or smaller - a limit that is used to define the LSST survey.  This airmass results in a 0.6 mag loss of sensitivity at 500 nm compared to an observation at zenith (due to both seeing degradation and atmospheric absorption), and corresponds to an observable area of 31,000 square degrees.

Sky regions with -75 < Dec. < +15 can be observed at an airmass of 1.4 or smaller, providing especially good image quality for weak lensing and other science programs that require it.  The total accessible area in this range, outside of the star-crowded parts of the galactic plane, exceeds 20,000 square degrees. The two dashed blue lines in the figure below outline the 24,000 square degree region for which the minimum airmass reaches values of less than 1.4.

For the Wide-Fast-Deep (WFD) observing program, we use 18,000 of the possible 24,000 square degrees to meet the Science Requirements Document (SRD) design goals. The WFD science program is designed to provide data for cosmology, transients and moving objects.

The figure above is a summary of the observing constraints in equatorial (top panel) and galactic (bottom panel) coordinates. The two dashed blue lines outline the 24,000 square degree region for which the minimum airmass reaches values of less than 1.4. The galactic plane regions with the highest stellar density are demarked by solid red lines and enclose 1,000 square degrees.

How the Simulator Works

The LSST Operations Simulator is an application created primarily with an open-source simulation package--SimPy.  SimPy is an object-oriented, process-based, discrete-event simulation package based on standard Python and released under the GNU GPL.

Modeling the Telescope and the Sky

The simulator uses a sophisticated model of the sky. It computes the sky brightness using the Krisciunas and Schaeffer (1991) model, and it tracks the positions of the Sun and the Moon using SLALIB routines.

A detailed telescope model tracks the movements of all the components: mount, dome, optics, instrument rotator, cable wraps and filter changer. The velocities and accelerations for these motions are all settable parameters. There are open-loop optics alignments for all moves and closed-loop alignments for moves in altitude greater than a settable parameter (currently 9 degrees).The telescope model is used to calculate a penalty for the time it takes to slew to a proposed next field which factors into the scheduling decision-making process.

The simulator employs models for atmospheric seeing and cloud conditions.  Available DIMM data has been used to determine the power spectrum of the seeing throughout the year, and a model data sets having that power spectrum was generated. The cloud model is derived from 10 years of nightly observations of the sky by the CTIO night assistant. The simulator currently assumes an alternating one week and two week shutdown per year for scheduled maintenance, and can generate random periods of downtime.

The simulator is modular in design and can accept multiple, distinct observing modes which are used to specify the observing requirements for the science programs.  Each observing mode ranks potential observations based upon user-specified parameters, which control the hard-coded algorithms. Rankings are evaluated using the current seeing, sky brightness, and progress towards completing an observing mode based on previous observations. For observing modes with a specified cadence, the algorithm increases rankings for observations useful for that cadence. Currently, the algorithm does not look ahead to determine future events such as when a field will set, when the sun will rise, or if the field will otherwise become unavailable in the middle of a sequence.

Before an observation is scheduled, each of the observing modes rank potential target fields according to criteria such as timing, sky brightness, seeing, airmass, and progress toward survey goals. These rankings are then merged, penalties are applied for slew time, filter change times and other operational considerations, and ranked again. A visit is made to the best field, and the process repeats. We have found that surveys using the first four of these observing modes are sufficient to ensure meeting the Science Requirement Document goals.  The fifth mode is representative of a mini-survey or target of opportunity observing.

The number of visits obtained in each field in the r-filter for the first year of a survey is indicated by the shaded areas. Each of the areas of interest (labeled) has a specific cadence definition. It should be noted that this is the spatial distribution of the number of visits in the first year of a survey, and will not be as uniform as for the full 10-year survey.

How to Understand the Simulator Output: Visualization & Analysis

Once a simulated survey is planned, designed and executed, it is useful to evaluate whether that particular survey met the LSST project science goals. Quantifying how well a simulated survey achieves a science objective or whether one simulation is "better than" another is a complex and open-ended problem.

The Metrics Analysis Framework (MAF) has been created to to make it easy to read the simulation database, calculate sets of metrics, and visualize the results. This tool has been designed so you can easily write your own metrics to evaluate the OpSim pointing history for your own science.

This is an example of a diagnostic plot produced by the Metrics Analysis Framework. This is an inventory of the time spent observing during the night color-coded by filter for a 10-year survey. The enclosing curves indicate the time of civil (−6°), nautical (−12°), and astronomical (−18°) twilight. Note that only z- and y-filters are used between astronomical and nautical twilight. The Moon’s illumination (in percent) is indicated by the arbitrarily scaled white curve at the bottom of the plot.

This is an example of a science metric. It calculates how well a particular simulated survey can recover sources that vary on a particular timescale. The blue area in the right hand plot shows that objects which vary on periods of 2-10 days can be recovered quite well. 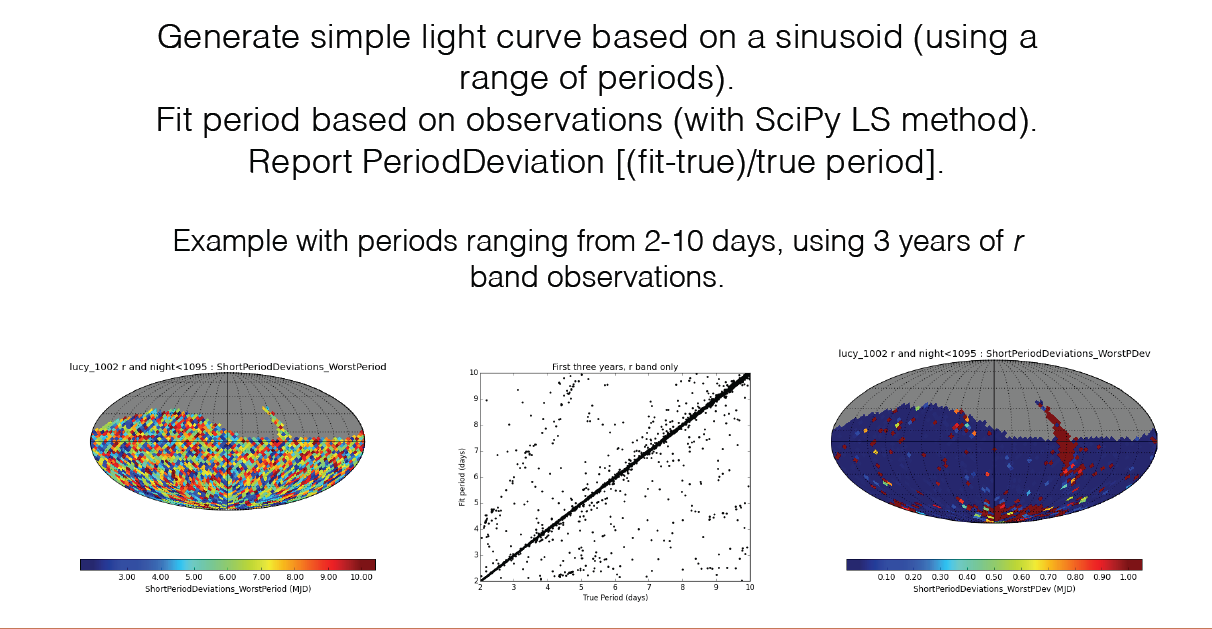 How to install and run the Operations Simulator