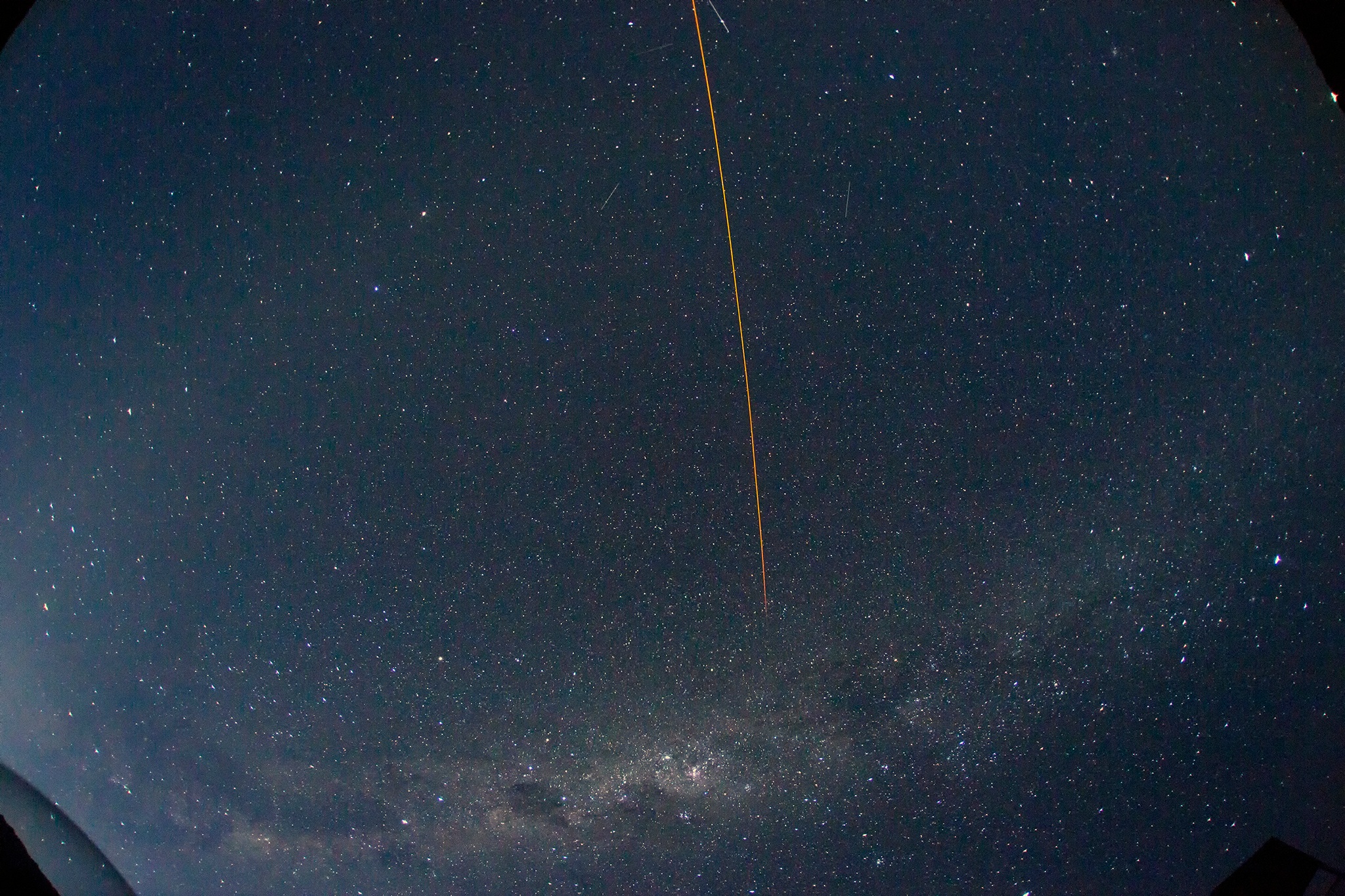 A single 10sec exposure form the Cerro Pachon All-Sky Camera obtained on the first night of operation, January 13, 2014.  The field of view spans 147.5 x 94.3 degrees and slightly more than 180 degrees in the corners where the local horizon is visible.  The orange streak is the Sodium laser being used for Gemini South adaptive optics.

The Large Synoptic Survey Telescope (LSST) is a wide-field 8m telescope that will survey the southern sky over a period of 10 years.  Each LSST observation (a visit) has a duration of 34 seconds consisting of 2 back-to-back 15-second exposures re-pointing to the next sky position.  The LSST will implement a "scheduler" that will optimize the observing cadence against science priorities and local observing conditions.   To this end the LSST project has developed an operations simulator (OpSIm) that models the temporal sequencing of visits given parameters of science proposals, constraints of hardware performance and historically based observing conditions (seeing, sky brightness and weather).

The current inputs used in the LSST OpSim for the site characteristics, seeing and weather, are based on measured data from the LSST site on Cerro Pachon and CTIO.  The OpSim seeing model was based on DIMM measurements made on the LSST site from 1998 - 2006.  The DIMM data were scaled for an outerscale of 30m and an 8.4m aperture following Tokovinnin et al. (199?) to form a prediction of the expected atmospheric delivered image quality that would be seen by LSST.

At the time of the initial OpSim development there were not sufficient data from the LSST site to develop a weather model (cloud coverage vs time). Instead we developed a weather the OpSim weather model from CTIO night logs taken from 1975 - 2005.  These night logs recorded the observations of the on-site telescope operator and their assessment of net cloud cover on a scale of 0 (no clouds) to 8 (completely opaque) every 3 hours (typically 4 times per night).  These logs contain no information about the spatial structure of the observed clouds and are by their nature qualitative. The current OpSim treats the cloud cover as uniform over the whole sky and derived extinction from scaling the cloud cover fraction.

The current input models for the sky brightness, transparency and cloud cover lack the spatial and temporal resolution needed for detailed algorithm optimization for the LSST scheduler. This project aims to obtained high fidelity multi-color data over most of the visible Cerro Pachon sky from which we can develop a high fidelity models that can be used for scheduler optimization.  Alternately the empirical data can be used as direct input to the optimization effort.

We used a Canon 5D Mark III digital SLR camera with a (initially) 15mm focal length f/2.8 Sigma fisheye lens, (lens web site)pointed at the zenith. The camera is installed beneath a hemispherical plexiglass dome that is installed in the roof of the ALO building on the Cerro Pachon ridge.

The CMOS imager in the Canon 5D camera has a Bayer array in the focal plane, with sub-pixels allocated to BGGR. The relative spectral response of the sensor is shown below. 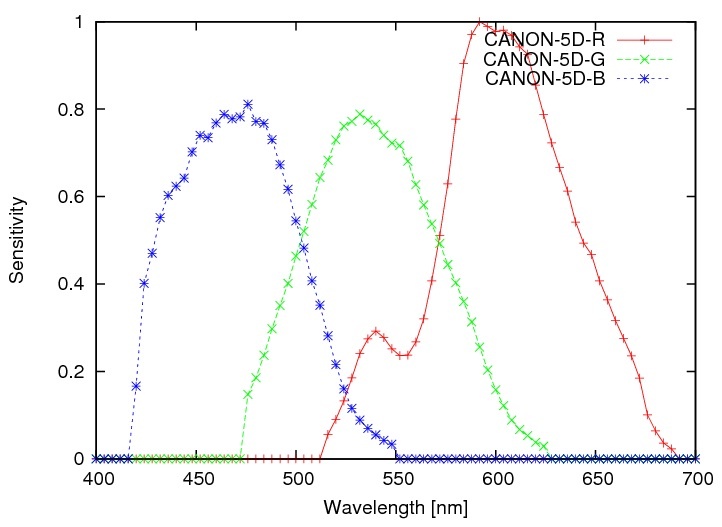 These bands are fairly close to the astronomical standard BVR set of filters. Although one can obtain modified Canon cameras with the NIR-blocking filter removed, the unit we installed in Jan 2014 was an off-the-shelf version. This means the sky brightness in these bands will be dominated by scattered and reflected sunlight and unresolved sources, but we aren't sensitive to OH emission. More information on filters here : filter considerations

We have two measurement objectives:

For the first of these our plan is to use the sum of the color channels to obtain the highest possible SNR, and monitor the flux from stars over time. For the sky brightness we'll use the color information of the diffuse background flux.

Data collection is performed using an Apple Mac Mini, and the gphoto2 open source software that can control the Canon 5D camera over a USB cable.  A cron job starts execution at a time that depends on the month of the year, and a pair of long (10 sec) and short (1 sec) exposures are obtained each minute. Images are stored as .CR2 format raw image files, and then converted into FITS images using a Tonry-modified version of the dcraw open source code from Dave Coffin. The modified version constructs more complete headers, including MJD, etc.

Here is an example FITS header from one of the single-band images extracted from the CR2 file:

The instrument is presently configured to start taking data well before the start of twilight, and to take pairs of images each minute. One of the pair is a 1 sec exposure, the other is 10 seconds. The startnight.sh script takes a single argument, namely the number of frames to take before stopping. A typical summertime value is 1000, and that generates 25 GB of uncompressed raw .cr2 images. That data volume gets expanded during analysis, but we then delete the intermediate FITS files, since they can always be regenerated from the .cr2 images.

The *cr2.gz compressed raw images are stored on an external disk, presently /Volumes/2TB. A thousand images take up about 22GB when compressed, so we should be able to store three month's worth of collections on the external disk.

External access to the data collection machine is through scp or ssh, at

Summary data are also placed on the Amazon cloud at

It's essential that each night's data collection begin before midnight UT, in order for the directory and file naming conventions to work properly. So don't modify the crontab file!

The shell scripts reside in the home directory of user 'christopherstubbs' on the data collection machine. Relevant scripts are

getsky.sh: does simple statistics in a 400 x 400 pixel box in the center of the image, in each band

testimage.sh: takes a single 1/8000 sec f/22 image and calls it test.fits, reports statistics on the image as well.

makeskyplot.sh: makes .eps file using supermongo of sky brightness vs. MJD for a given night

All data from a given night are collected before any analysis is started. Once the night's collection is finished, the following things happen

Sky brightness in B,V,R vs. time, for night where moon set at the end of the night 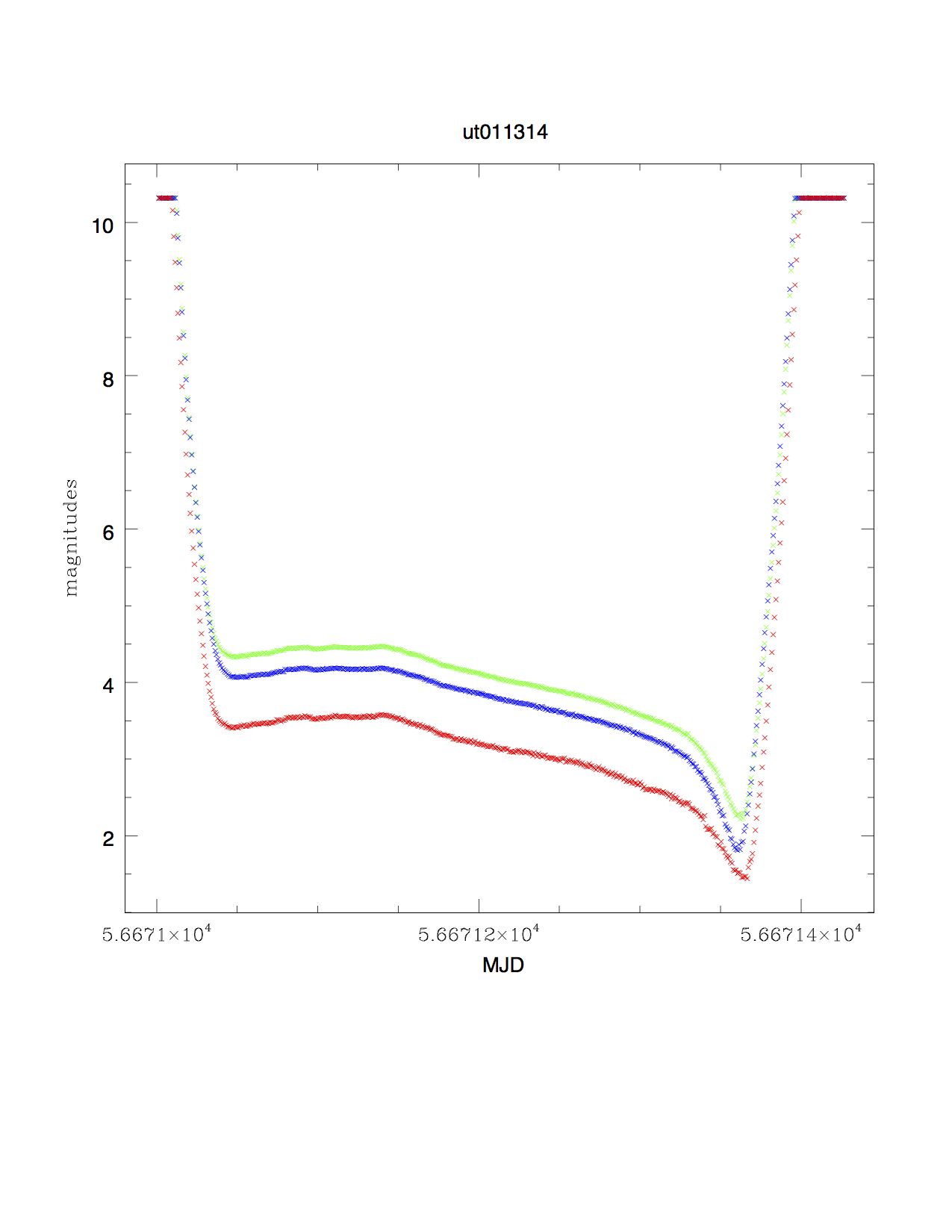 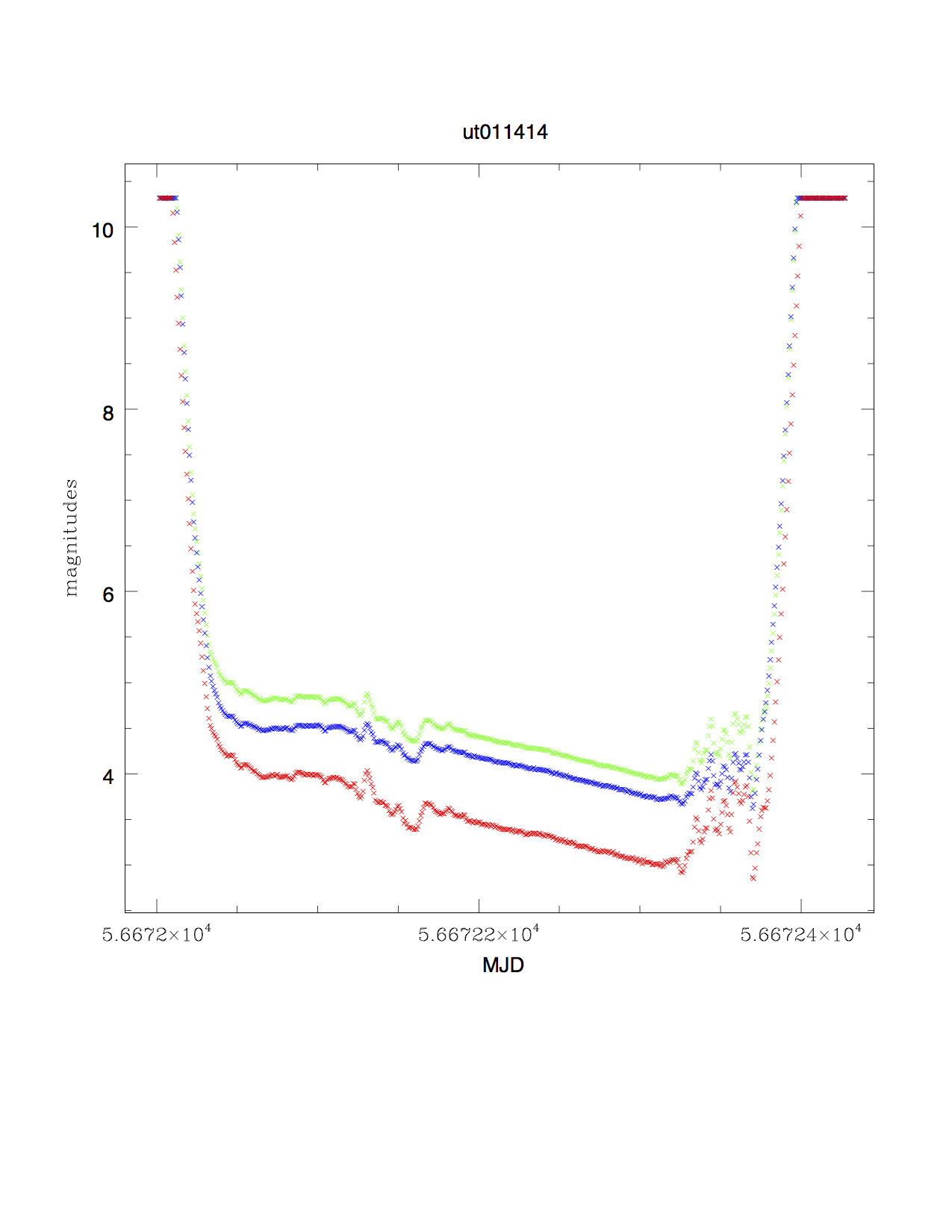 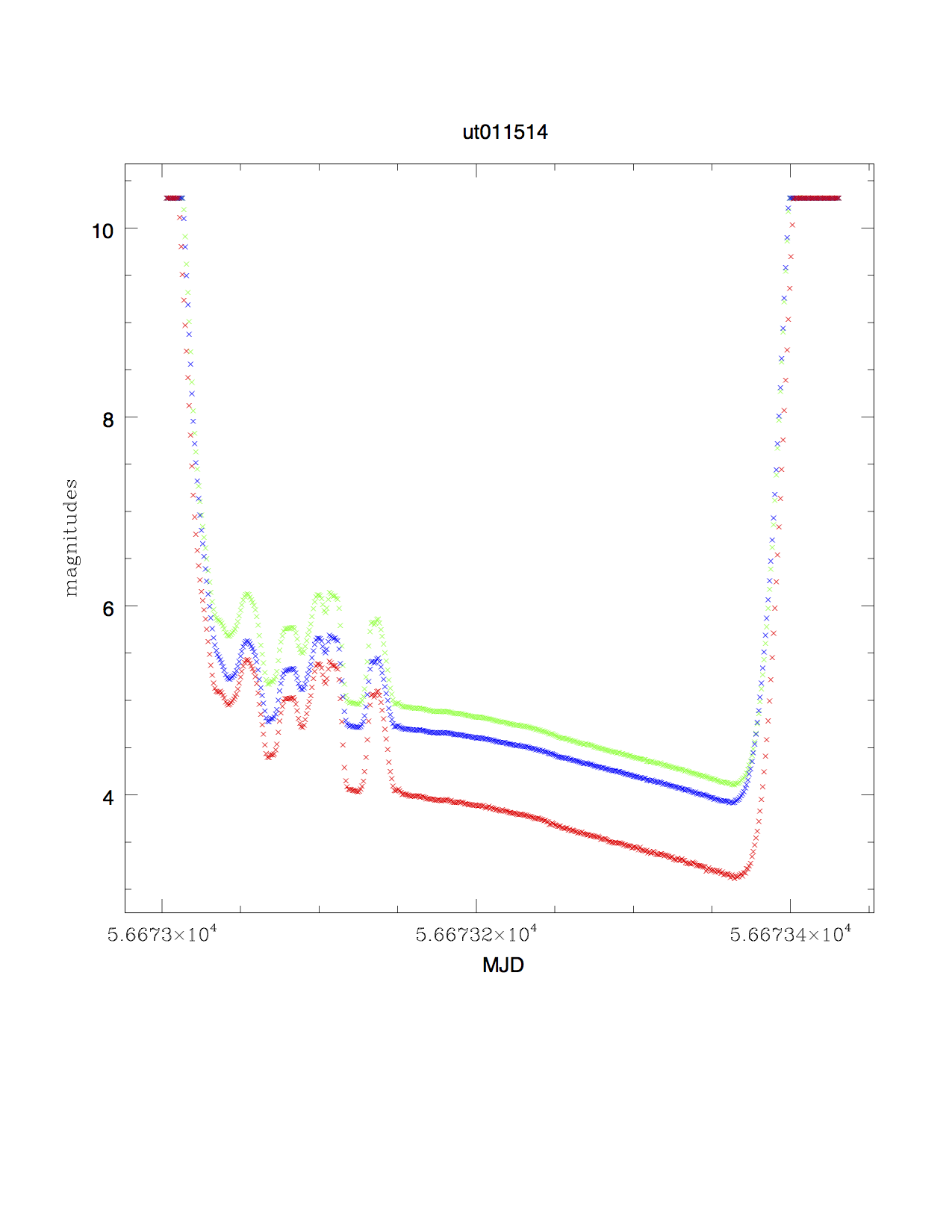 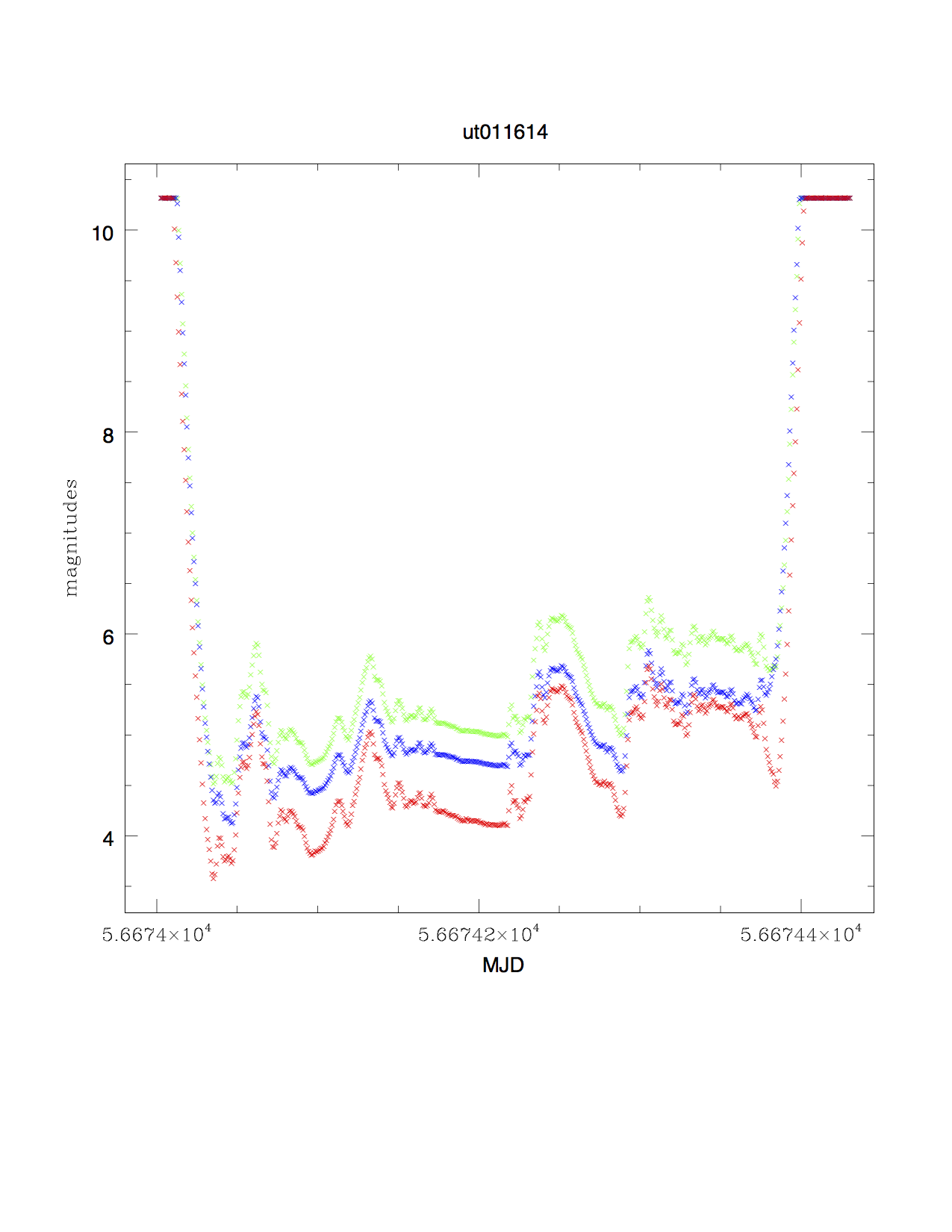 surface plot of sky brightness across the image: 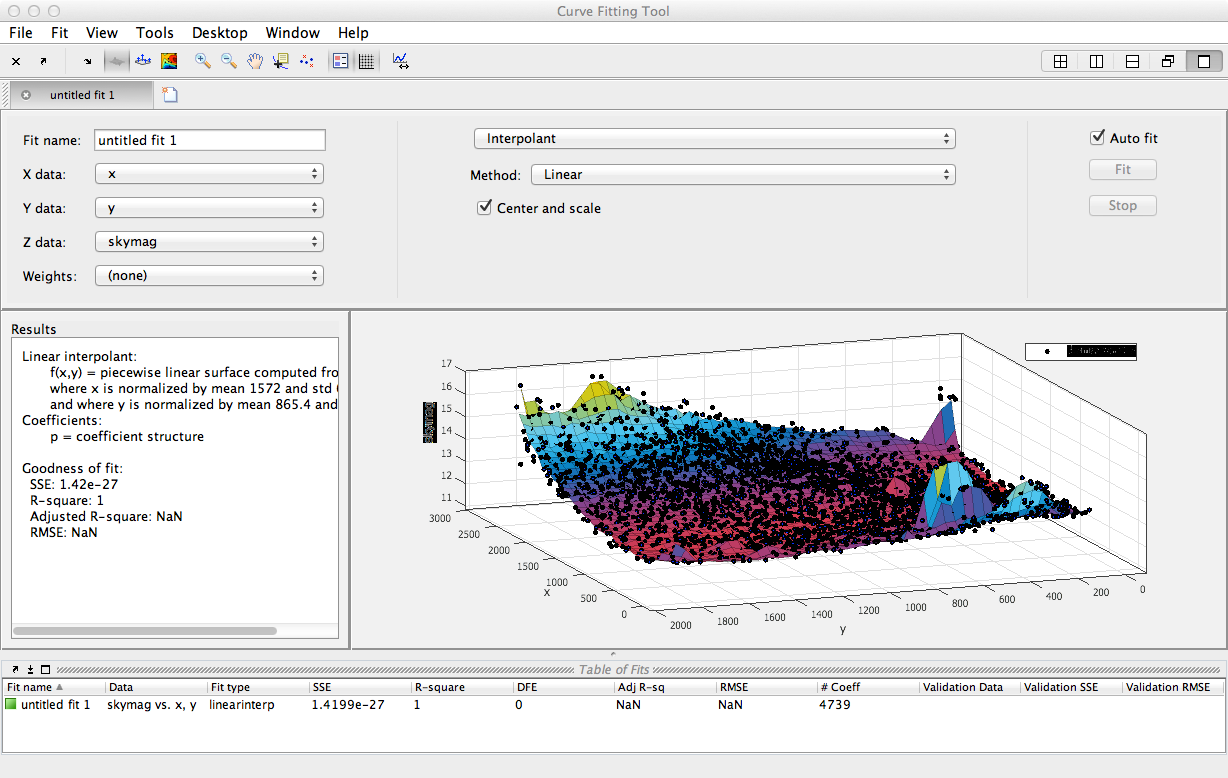 setup and configuration of Mac Mini