It would be simplest if we pointed at the South celestial pole. Need to compute how much flux comes from point sources and how much from stars, as a function of distance away from the S celestial pole. I queried Simbad to find stars close the S pole that are brighter than 12th magnitude. That file is here: stars.dat

We can make a comparison of stellar fluxes to sky brightness without knowing the number of photons per sec associated with a certain magnitude. All that matters is the relative flux level between stars and sky. Nominal V band sky brightness is 20th mag per square arc second. Since fluxes are additive and magnitudes are not, We'll make this assessment in flux units.

Now let's add up, as a function of increasing declination, the flux contribution from point sources that are brighter than 12th magnitude, as we move away from pole.

In these units each point source contributes a flux of 10^{-mag/2.5}. So a zeroth magnitude star contributes one unit of flux, in these relative units, and a fifth mag star give 1E-2.

I sorted the data file in order of increasing declination, and made a plot of cumulative flux from point sources as a function of declination.

here is the resulting plot: 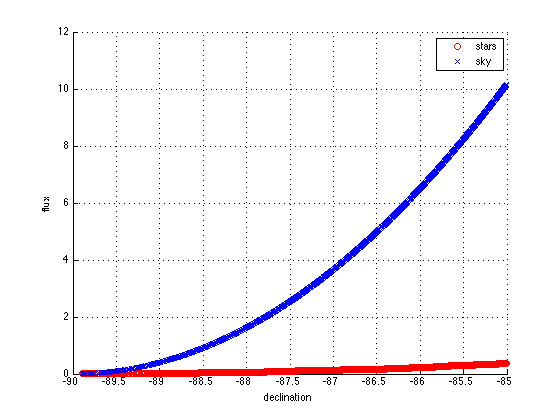 So in a diameter of 10 degrees centered on the S celestial pole, the flux sky brightness at V=20th mag per square arc sec totally dominates over the flux from point sources. In fact the ratio of the enclosed fluxes within this aperture is about 27. Contamination from starlight is a 4% correction to the sky brightness, down to 12th mag. Here's a plot of starlight component only: 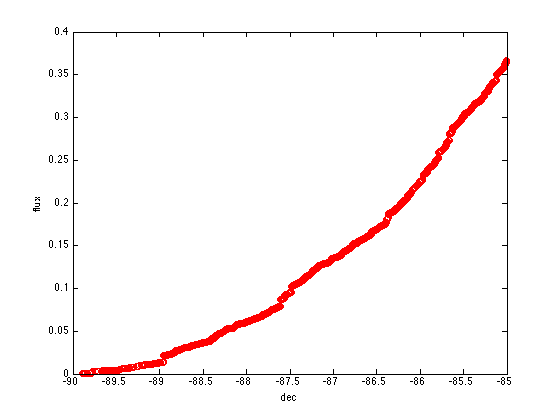 So it's fairly gradual, and is not dominated by any specific bright stars.

How does the ratio of sky flux to integrated stellar flux depend on declination? 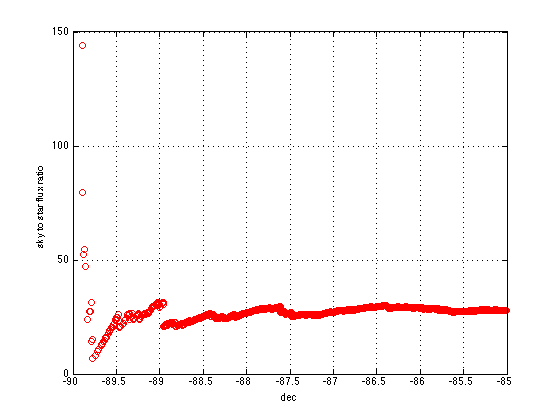 It looks like any field diameter greater than about 4 degrees is about the same.

So we're looking for an f/4 lens with a 4-5mm focal length. (Ocean Optics spectrograph is f/4).

fiber would give us a field diameter of 5.6 degrees. That corresponds to going out to dec of -87.1 degrees radius in above plots.

2) Another option is to just point the optical fiber at the sky, limiting the input f-number to f/4 with a baffle. This would subtend an angle on the sky of 45 degrees. We could then trade off collecting area against spectral resolution just by picking different fiber sizes.

3) A third option is to use a Fabry lens, where the input pupil is imaged onto the optical fiber surface. See http://www.hposoft.com/IAPPP/PEPManual/ManualP6.html for an example of this.

A link to at least one example of Linux code for Ocean Optics is here, could likely be used with Raspberry Pi system: