The prototype code can be browsed and cloned from the LSST git repo.

Requirements for the MAF

With Opsim generating increasing numbers of survey simulations, we need an effective framework for evaluating and comparing the results.  Features we are specifically interested in including in the MAF include:

The full requirements are listed in this pdf document.

For this review we are focusing on the underlying building-blocks of the MAF, the binners, metrics, binMetrics and db access.  Details of how to comprehensively present the resulting plots and summary numbers to users (i.e. visualization/presentation) and driver scripts will be reviewed separately.

The building blocks for calculating metrics include

The process to evaluate metrics from scratch (from the Opsim simulated survey data) then would proceed roughly as follows:

A requirement for the MAF is to be able to compare metric data values resulting from evaluating different opsim runs. The process to do this would be as follows:

Details of the classes

The db classes provide methods to query simulated data stored in a database (all kinds of databases, including sqlite) and return that data in a standard data structure, either a numpy recarray or a catalogs.generation chunk iterator (useful if the data set is especially large). Classes in the db package include 'Table' and 'Database'.

The 'Database' encapsulates knowledge about the Opsim output data tables, which hopefully enables the user to know fewer details about the contents and relationships between various Opsim tables. (This is not currently fleshed out beyond the API, for the most part).

The 'Table' class does the actual work of constructing a SQL query from a set of columns (either user-provided, or generated by introspection of the database table if not specified) and SQL constraint (if provided by the user) including a possible 'group by' constraint, querying the specified database table, and returning the data. Table uses tools from the catalogs.generation package to do the actual query, including generating the column mapping from SQL to python types and column name introspection, and to connect to the database. Table, as well as the underlying Catalogs.generation DBObject, uses sqlalchemy, making it possible to query any kind of database.

We are currently only using the Table class to query the output_opsim* database table. The output_opsim* table is a materialized view which joins several of the tables output by Opsim, and contains information sufficient to address a majority of science metrics.

An example of using the Table class to return selected data from an Opsim run. dbTable is the database table name, and dbAddress is a SQLalchemy connection string (see http://docs.sqlalchemy.org/en/rel_0_9/core/engines.html#database-urls). This demonstrates the API used for accessing the simulated survey data.

The binner determines what data the metric will be applied to, and thus its most important function is to know how the data is sliced (and do that slicing).  Bins can be a spatial grid, such as a HEALpix grid, or bins can also be defined on arbitrary parameters, such as "airmass" or "seeing" (and can provide slicing in 1-dimension or more). The binpoints would then be the RA/Dec points of the healpixel grid or the steps in airmass or seeing values. The binner must be iterable over its binpoints.

The methods related to slicing the data are 'setupBinner', which defines internal parameters needed to know how to slice the opsim survey data, and 'sliceSimData', does the actual slicing. The APIs of the two methods are as follows:

The 'setupBinner' method arguments are generally simdata columns which will be used for setting up data slicing, while the kwargs are optional arguments relating to the size of those bins. The sliceSimData returns the indexes of the numpy rec array of simulated survey observation data which hold observations relevant to a particular binpoint.

The final general public methods on the binner class involve reading and writing metric values to disk. The output metric data values are saved in FITS format files, one file per metric, along with all provided metadata (such as the name of the simulated survey data run, how the simulated survey data was selected from the database, what kind of binner was used (and information about the binner), and any user-provided comments.

The metric classes are the code/algorithms which actually calculate the metric values on a data slice. Each metric has a 'run' method, which is given a slice of Opsim data (a numpy recarray with the Opsim pointings relevant to this binpoint), then calculates and returns the metric data value for this slice of the opsim data.

Metrics are divided into simple metrics and complex metrics. Simple metrics operate on one column in the numpy recarray of Opsim data and return a single scalar number (per bin point).

Complex metrics operate on one or more columns in the numpy recarray of Opsim data and can return more than a single float - either a fixed or variable length array object. The purpose of allowing complex metrics is to provide a way to calculate more expensive metric values once, and then allow the results of these expensive calculations to be reused for multiple purposes.  Each complex metric must offer some 'reduce' methods to reduce the variable length array produced by the complex metric analysis into a simple scalar for plotting. The best example of this use would be for SSO completeness, and calculating when each SSO orbit was visible in an Opsim survey. The reduce methods for SSO completeness would then include calculating whether a particular SSO could be detected using varying detection criteria for MOPS.

An example of a simple metric run method:

An example of a complex metric run method and some of its 'reduce' methods:

The metrics are where we envision most users writing new code to add into the framework.

The binMetric provides a class to combine a binner and (possibly several) metrics to be computed on that binning scheme, and is intended to be a tool to work with binners and metrics. The binMetric provides the storage for the metric values, and easy methods to run all metrics over the bins, as well as providing convenient ways to pass/get the metric values to the binners' plotting and writing/reading methods. It also keeps and manages metadata about each metric, which is passed into the plotting routines to add labels and passed to the 'write' methods to keep track of provenance. The binMetric can also generate appropriate comparison plots when using multiple metrics calculated on the same bins (but for multiple opsim surveys or sql constraints).

The binMetric class saves the metric values in a dictionary (self.metricValues) keyed by the metric object's metricName. In addition, it saves a simDataName (intended to be the Opsim run name), metadata (intended to capture the configuration file details for selecting the data from the Opsim run – i.e. 'r band' or 'WFD') and a comment (any user comment) in dictionaries also keyed by metric name. For metrics which produce complex data, after running a reduce method, the metric values are saved in the metricValues dictionary using the metric name combined with the reduce function name. The simdataName, metadata and comments are duplicated for this new metric name + reduce function name from the original metric name, in order to facilitate saving (and later reading) either the full metric value or the reduced metric value.

Methods and their APIs for the base binMetric:

By combining multiple metrics in a spatial binMetric, we can query the spatial bin KD-trees once for every bin and then send the resulting data slice to all the metrics. This is significantly more efficient than repeatedly querying the KD-tree for each metric, and we find (with simple metrics like 'mean', 'min', 'max', etc) that we spend comparable time querying the KD-tree as we spend computing metrics once 10 or more metrics are bundled together. 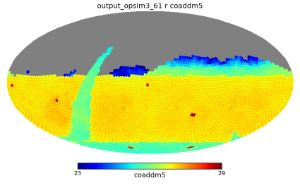 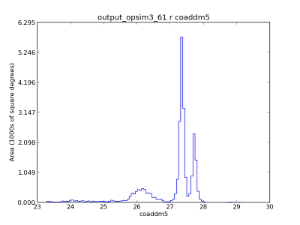 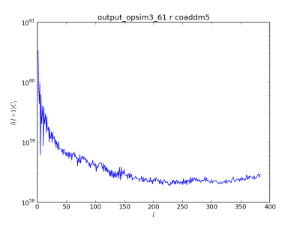 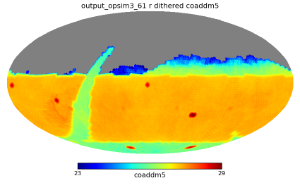 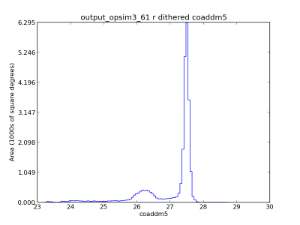 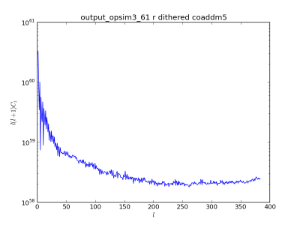 An example of using the HEALpix spatial bin to look at the co-added 5-sigma limiting depth.  The top panel show an analysis with dither turned off, while the bottom panels show the results with dithering.  This is an example of a metric being computed using a spatial binner. 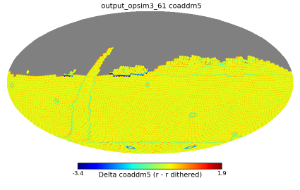 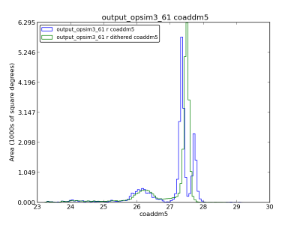 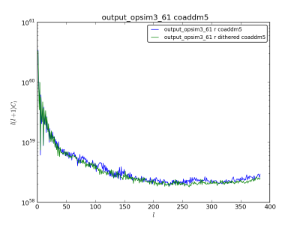 Comparison plots of the co-added 5-sigma levels with and without dithering. 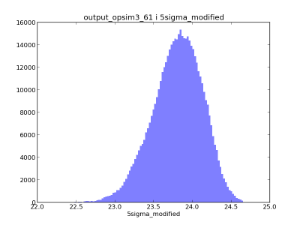 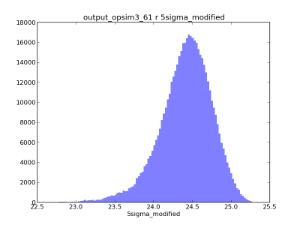 Example oneD binned metrics, the 5-sigma limiting depth distributions in r and i. The oneDBinner combined with a 'count' metric basically creates a histogram.

The code which generates the plots above –